Turning the Pyramid Upside Down

Remember the final scene in The Da Vinci code? The hero returns to the Louvre, where the story began, and realizes that the “grail” for which he has traveled so far, is at the base of the inverted pyramid in the lower level of the museum. The final competition of the Imagine Cup was held in a hall next to this inverted pyramid. I’ve been thinking about this image ever since, hinting at it at the end of my last entry. In the conversations I’ve had since returning to the U.S. some important insights have emerged from the dialog. 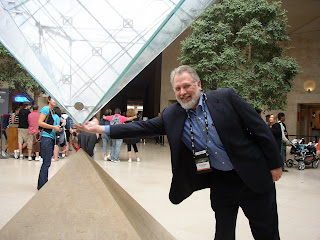 I wrote last week that our teachers may in fact be those who we aspire to teach. Listening to the students reminded me of the value of approaching even familiar situations with beginner’s mind[1]. Having been immersed in technology for over 30 years gives me perspective, especially about the cycles that come and go; it is also an obstacle. It means that the lens through which I look at the world may miss what is new and changing.

Seeing the many presentations and demo’s from over 60 countries at the Imagine Cup drove home the point that innovation can come from the least experienced. These were college and some high school students. There was little if any business experience among them. Yet the level and extent of technology innovation was palpable. It stimulated my thinking about how the work they did could be applied in international nonprofits, especially for emergency response. I brought back with me a hand full of business cards and copies of a few presentation decks. I intend to follow-up with some of the teams.

It was evident from the work the students did, including impressive presentations, that many hours were devoted to these projects. Full-time students don’t have many discretionary hours. My experience at Tuck/Dartmouth reinforced the fact that students are overloaded with work. It is part of the “exercise” of academics, stretching the can-do muscles and learning to effectively triage. 124 teams got it done. Innovation is not about freeing up hours from the required work to do the elective work. Students found the time. To again echo Gustavo Dudamel, “When you love something, you have time; you have a lot of time.”

When we are faced with change and the realm of the new, it is natural to think of the obstacles—all the ways it could fail or won’t work. Experience does that; it gives you a rich set of comparisons. The students I heard in Paris did not have a sense of the practical. If they could imagine it, it could be done; it was worth a go at it—without the baggage of experience. The inexperienced have no bounds; imagination knows no limits. We need this unbridled sense of optimism to reinvigorate our forays into innovation.

Keep in mind that these students were from 61 countries. This was not a competition exclusive to the most advanced nations. In fact, the three teams that caught my attention, Ukraine, Brazil and Indonesia are all outside North America. What does that mean? What it said to me is that innovation can come from anywhere, even the far reaches of the world[2]. This presented me a more concrete challenge to expand my thinking about headquarters humility—a recommendation I’ve made at conferences to look for innovation in the field rather than down the hall. Humility means not only looking for ideas outside HQ, but soliciting them, expecting them to arise from afar.

Another observation about the Imagine Cup contestants was that these were very small teams; most appeared to be comprised of three to four students. For the innovation teams, small was beautiful. It does not take an army, or a large investment.

At the final award ceremony 27 teams won awards. I was astonished to find out that the competition began a year ago with over 200,000 applications! If ever there was a magnet for innovative ideas about technology from our youngest and brightest minds, this was it. The recognition and prestige of the awards motivated responses from the largest number of places. This is not to be underestimated in an innovation program. This is a brilliant event for Microsoft to run; it provides a pipeline of new ideas and future developers in a way that recruitment programs could not hope to achieve.

What’s the bottom line for Save the Children? We are going to turn the pyramid on its head. Instead of looking to HQ for top-down applications and expecting compliance from our field organization, we are going to solicit and encourage field-based innovation. So we will be starting our own Imagine Cup at Save and looking to take the best technologies to scale for the rest of our organization. Stay tuned for the results.

[1] See http://en.wikipedia.org/wiki/Shoshin
[2] While I was doing research at Tuck, I had an interesting conversation with the chief innovation officer of a major health care corporation. He said that the key to successful innovation at his company was to send the team responsible to another state. I’ve referred to this as Peter’s Law of Proximity, after a talk I heard Tom Peters give a decade ago. The principle is that the level innovation is directly proportional to the distance from headquarters. So you may need to send the team to the far country to get new ways of thinking about problems and solving them.
Posted by Edward G. Happ at 4:42 PM

Ed, I had never heard of Peter's Law of Proximity.

Now I realize that it not such a bad thing that you have me so far away from HQ at times!