Two weeks have passed. I am back at Save the Children, having moved to Connecticut soon after commencement. One of the questions an advisor asked was “how will you continue the good things you began while on sabbatical?” The intriguing point to this question is not about going back, but rather continuing forward.

More than a passing few asked me if I would ever return. When you have the opportunity to pursue a dream, why wouldn’t you go with it?

One of the more meaningful talks I discovered on-line while at Tuck was Randy Pausch’s last lecture at Carnegie Mellon about achieving your childhood dreams (See the video at http://www.youtube.com/watch?v=ji5_MqicxSo ). With six month’s to live, he talked about experiencing each of the dreams he had and what he learned from each. The question of “on what would you lecture if you had only one to give before you die,” was very real to Randy.

My friends and colleagues know that I’ve been saying for a long time, if I won the lottery, I’d teach. The opportunity to go to Tuck as a visiting fellow was an opportunity to live my dream for a term. I would not have traded it for anything.

The “last lecture” and the “lottery” questions are strategic questions of the unusual kind. They get at the core of what to pursue by removing the usual obstacles of unlimited time and paying the bills. Imagine having such a discussion at the next board meeting of your organization.

So what did I do? I wanted to continue working with students. So I volunteered to help as a volunteer advisor and occasional lecturer at the Yale School of Business—about a half hour from Save the Children. I am also honored to be a judge in the Microsoft Imagine Cup competition for international students in July (See http://imaginecup.com/About/WhatIs.aspx for details.) I wanted to continue writing. So this Blog has a future, and research papers and books will follow. I wanted to continue the discussions with academic and corporate leaders. So I attended a thought leaders roundtable the Center for Digital Strategies at Tuck sponsored in Cleveland last week (More on this in my next entry.) I wanted to continue speaking engagements, and am setting up a lunchtime lecture series at Save. I’m also helping organize an international nonprofit roundtable on technology in Berlin in September and expect to continue an aggressive speaking schedule. I also wanted to apply what I learned at a nonprofit organization that is making a difference in the world. That—and a fair amount of gratitude—is why am I am back at work at Save the Children.

So the good work I began continues. One definition of sabbatical is “any extended period of leave from one's customary work, esp. for rest, to acquire new skills or training, etc.[1]” I note that the leave is from one’s customary work; it is not a leave from work—in fact, acquiring new skills can be a stretch, using muscles in the mind not exercised in a while. I can attest to the good ache. Where then is the rest? The rest is in pursing your dreams. A 60 Minutes reporter asked Gustavo Dudamel, new conductor of the Los Angeles Philharmonic, where he found the time to do all he does. Dudamel answered, “When you love something, you have time; you have a lot of time.”[2]

"What we call the beginning is often the end
And to make an end is to make a beginning.
The end is where we start from. ...

We shall not cease from exploration
And the end of all our exploring
Will be to arrive where we started
And to know the place for the first time."

Today was graduation for the Tuck Class in 2008. Spirits were high, undamped by the hot and humid weather. Graduation for the business school is called an investiture, rather than the more traditional commencement. Per Webster’s (see below,) there’s a century separating the origins.

in·ves·ti·ture
Function: noun
Etymology: Middle English, from Medieval Latin investitura, from investitus, past participle of investire
Date: 14th century
1 : the act of establishing in office or ratifying
2 : something that covers or adorns

com·mence·ment
Function: noun
Date: 13th century
1: an act, instance, or time of commencing
2 a: the ceremonies or the day for conferring degrees or diplomas b: the period of activities at this time

Etymology aside, I was struck by the emphasis on life and relationships. The class president quoted Churchill at the beginning and end of his speech: “We make a living by what we get, we make a life by what we give.” He spoke about giving to the world, community and each other. The student who followed him talked about “Tuck love” and the sense of community among the students (and alumni.) The willingness to help each other stood out in his speech. Even the reading of the 1904 letter by Mr. Edward Tuck, son of the man for whom the school is named, spoke to the giving side of the school: “To the maxim of honesty is the best policy should be added another: that altruism is the highest and best form of egoism…” For a place that I noted on another day was the bastion of left-brain thinking, here was a litany of right-brained thought. The founders of the school would be proud.

Here are some photos from the ceremony: 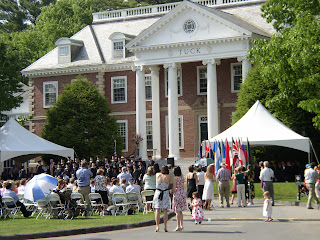 The students elected as Tuck Scholars 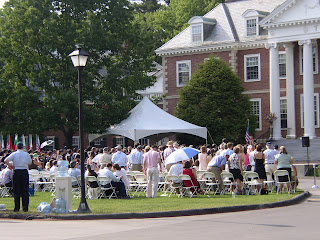 A standing ovation for the graduating class 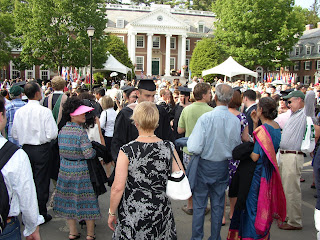 After the recessional. The pictures with family begin.

I return to Save the Children on Wednesday. So this is a commencement of sorts for me as well. As Eliot so eloquently says, “The end is where we start from.” Look for more entries in this Blog as I reenter the world of work, no doubt a changed man.