pas·sion
Function: noun
Etymology: Middle English, from Anglo-French, from Late Latin passion-, passio suffering, being acted upon, from Latin pati to suffer…
4 b: “intense, driving, or overmastering feeling or conviction
[1]”

I am in the midst of the week-long Imagine Cup student software competition in Paris, France. (See http://imaginecup.com/Default.aspx .) Microsoft invited me to be a judge. I could not think of a more fitting follow-on to my time at Tuck/Dartmouth. I began my sabbatical with the burning desire to work with promising students, and to encourage them to aspire to be leaders in technology. I am here, at a gathering of nations, doing the same.

For the past two days, I’ve heard thirteen team presentations from thirteen countries—all in the software design category. On Monday, I will hear five more, for the new Rural Innovation Award. These are mostly college students, with a few, notable high school wizards. We heard during the opening ceremonies that over 200,000 students applied for the competition. Over 70 country-teams made it to the finals in Paris. Of these, we will select three winners. The task is daunting and the stakes are high.

I’ve written elsewhere about Jack Welch’s criteria for selecting leaders at GE—his “four E’s and a P.[2]” Energy, Energizing, (Decision) Edge and Execution are the four. The final one is Passion. The students who made it to the Paris finals are the best of the best from the countries selected. I saw evidence of all of these five qualities among the participants. But the one that stood out most was the passion. There is something about seeing a budding entrepreneur who believes to-the-core in her product that engages me. Each group was nervous. I could see it in their hands and hear it in the waver in their voices. Yet those with passion about their project shone through the stress of stage and judgment.

We need this passion in our organizations. It enlivens us and reminds us why we came to our job in this first place, full of hope and expectation. I read of an old pastor who liked to be in the midst of new converts, because it renewed his faith. Gary Hamel, strategist and business professor, suggests that “If you’re a CIO, you need to spend a lot of time out on the fringes of the Web because that’s where the innovation’s taking place. You need to spend a lot of time with people under 25 years old.” [3] That’s another reason I am here in Paris; I’m hanging out with students, many of whom have not reached their twentieth birthday.

In recent presentations on the future of technology, I’ve proposed that “what are your leading indicators” may be the wrong question[4]. Rather, we should be asking “who is our leading indicator?” Where do we find out about what’s happening in technology over the next three to five years? We may all cite our favorite IT journal or technology research provider. I propose that an important leading indicator is children. When we watch how youth are using technology we learn. Seeing how the students in the Imagine Cup presentations approach a problem, develop a solution, and make their pitch for why theirs is best is less an opportunity to judge than to learn.

Another side to passion is that it drives you over the edge, out of your silo and box of thinking an experience. The students here do not have a sense of limitations. They certainly face serious challenges in many of their countries, but technology is a wide-open playground. I saw this in the many applications that used cell phones as a natural gathering and delivery device. One in particular was a phone-based emergency response application that I believe has promise for the emergency response work we do at Save the Children. More on this as I learn more. Watching these young contestants pushed me to see things outside of my silo, over my horizon.

During the Tuck Roundtable in Cleveland I mentioned in my last entry[5], I sat next to a Fortune 50 CEO at an elegant dinner overlooking Lake Erie. We got to talking about working with young people and encouraging them to pursue technology. He said that we need to instill a sense of engineering and scientific wonder in 7th graders; by the time they get to college, it may be too late. I may need to start hanging around 12-year olds.

One final word about passion. You may have noted the Latin root that indicates pain and suffering. Aside from the religious history, I’m intrigued by the pain that often accompanies the joy of pursuing your passion. This is certainly a part of the inevitable failures that come with innovation. I also saw it on the faces of contestants who did not make the semi-finals or the finals this week. They wanted to know where they had failed, how they could be better. Two in particular said they were making the rounds to see all the judges that saw their presentations. They wanted honest feedback. I gave them that. I also wrote comments and suggestions on most of the judge’s cards I entered. I want each of them to learn, to push on, and to succeed as the technology leaders I see them becoming. Most important, I did not want to see their passion ebb one iota. As John Donne so eloquently said, “That our affections kill us not, nor dye.[6]”

p.s. Friday was the Fourth of July, Independence Day in the U.S. The sun was shining. During the break, I went out on the bridge over the Seine, and shot this photo of Lady Liberty Duex, looking out in the distance. Fitting. 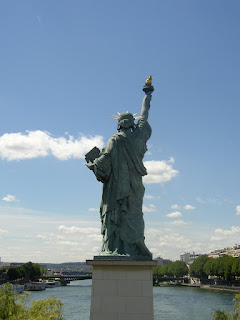 Lady Liberty II, overlooking the Seine. What better thing to

I have found that if I encounter a person passionate about a hobby, interest, topic, etc. - I can always learn from them, even if I previously thought the subject uninteresting. I have a fisherman friend whose hands I noticed shaking as we drove past a lake. He said that he knew fish were there!

Were the two liberty ladies facing each other?

A couple weeks ago I read your post referencing Einstein's quote ((A)Success = (X)Work + (Y)Play + (Z)Shutting one's mouth). It's been bugging me as I try to apply the formula to my own experience with passion. I am curious how you see passion fitting into it. The burning desires that define passion, the same ones that drive us to change our world for the better, can make work and play seem like the same thing... and how can we help but communicate the ideas that most excite us?

It seems to me that passion can be a double-edged sword when we try to achieve our goals. If our desire is to help humanity with technology, few people have the time or inclination to understand the topics involved. Technology by itself is a topic that generates glazed looks in normal conversation. For multidisciplinary ideas, e.g., those also involving sociology, ethnography, or psychology, each unfamiliar discipline only increases the likelihood of that expression. When communicating complex multidisciplinary ideas, I suspect passion is a hindrance without restraint commensurate to its intensity. Writing as one who is still young and lacking in business experience, I think I can safely say that restraint is not a quality that most youth possess in abundance.

I started out thinking that passion alters the equation. "It's all about desire and drive, not restraint." "Push ahead." "Tell everyone." "Sacrifice everything." Maybe that works for some ideas, but I'm increasingly convinced it relates inversely to the complexity of the idea. As complexity increases, and with it the time necessary for implementing the vision, our human limitations take hold and reduce passion's effect on the requirements of success. If so, then that is a lesson with difficulty only matched by the learner's drive to realize their vision... a cruel irony for the inexperienced and intensely passionate.

My own passion for involving youth in humanitarian technology has taken me down roads I never expected, most recently depositing me as an intern two doors down from you at SC. Your writing has given me much to ponder, and I appreciate your perspective. If you can spare some time someday (and Jen hasn't killed me yet), I would love to hear more of your experiences from the Imagine Cup. This is the first I've heard of it, and it sounds really cool.

Thanks for taking the time to write,